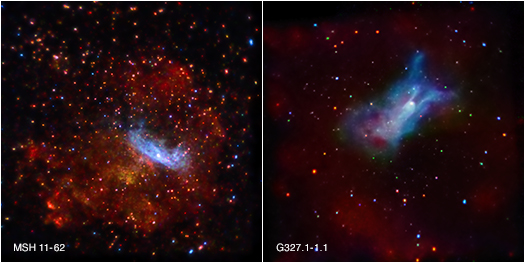 A supernova that signals the death of a massive star sends titanic shock waves rumbling through interstellar space. An ultra-dense neutron star

When a massive star runs out of fuel resulting in a supernova explosion, the central regions usually collapse to form a neutron star. The energy generated by the formation of the neutron star triggers a supernova. As the outward-moving shock wave sweeps up interstellar gas, a reverse shock wave is driven inward, heating the stellar ejecta.

Meanwhile, the rapid rotation and intense magnetic field of the neutron star, a.k.a. a pulsar, combine to generate a powerful wind of high-energy particles. This so-called pulsar wind nebula can glow brightly in X-rays and radio waves.

A long observation with Chandra of the supernova remnant MSH 11-62 (left image) reveals an irregular shell of hot gas, shown in red, surrounding an extended nebula of high energy X-rays, shown in blue. Even though scientists have yet to detect any pulsations from the central object within MSH 11-62, the structure around it has many of the same characteristics as other pulsar wind nebulas. The reverse shock and other, secondary shocks within MSH 11-62 appear to have begun to crush the pulsar wind nebula, possibly contributing to its elongated shape. (Note: the orientation of this image has been rotated by 24 degrees so that north is pointed to the upper left.)

MSH 11-62 is located about 16,000 light years from Earth. The foreground of MSH 11-62 is speckled with hundreds of sources associated with the open stellar cluster Trumpler 18, located at a distance of about 5,000 light years, revealing a vast collection of stars.

The supernova remnant G327.1-1.1, located about 29,000 light years from Earth, is another spectacular debris field left behind when a massive star exploded. The Chandra image of G327.1-1.1 (right image) shows the outward-moving, or forward, shock wave (seen as the faint red color), and a bright pulsar wind nebula (blue). The pulsar wind nebula appears to have been distorted by the combined action of the reverse shock wave, which may have flattened it, and by the motion of the pulsar, which created a comet, or lobster-like tail. An asymmetric supernova explosion may have given a recoil kick to the pulsar, causing it to move rapidly and drag the pulsar wind nebula along with it.

These results are presented at the "15 Years of Chandra" symposium (http://cxc.harvard.edu/symposium_2014/) by Patrick Slane of the Harvard-Smithsonian Center for Astrophysics, Cambridge, Mass., and Tea Temim of NASA's Goddard Space Flight Center, Greenbelt, Md.

What an outstanding time we live in that we mere mortals are enabled to see the fabric of time and space thank you for this site that as dark energy pushes our universe apart we have record of where we have been for future generations and to continual studies.

Excellent experience scrolling through your site, what a privilege, I am honored. What an achievement in the history of the greatest of science discipline. Thank You for sharing