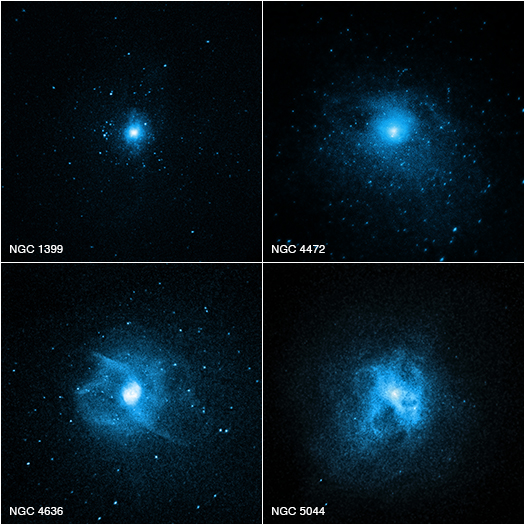 NASA's Chandra X-ray Observatory has shed new light on the mystery of why giant elliptical galaxies have few, if any, young stars. This new evidence highlights the important role that supermassive black holes play in the evolution of their host galaxies.

Because star-forming activity in many giant elliptical galaxies has shut down to very low levels, these galaxies mostly house long-lived stars with low masses and red optical colors. Astronomers have therefore called these galaxies "red and dead".

Previously it was thought that these red and dead galaxies do not contain large amounts of cold gas - the fuel for star formation - helping to explain the lack of young stars. However, astronomers have used ESA's Herschel Space Observatory to find surprisingly large amounts of cold gas in some giant elliptical galaxies. In a sample of eight galaxies, six contain large reservoirs of cold gas. This is the first time that astronomers have seen large quantities of cold gas in giant elliptical galaxies that are not located at the center of a massive galaxy cluster.

With lots of cold gas, astronomers would expect many stars to be forming in these galaxies, contrary to what is observed. To try to understand this inconsistency, astronomers studied the galaxies at other wavelengths, including X-rays and radio waves. The Chandra observations map the temperature and density of hot gas in these galaxies. For the six galaxies containing abundant cold gas, including NGC 4636 and NGC 5044 shown here, the X-ray data provide evidence that the hot gas is cooling, providing a source for the cold gas observed with Herschel. However, the cooling process stops before the cold gas condenses to form stars. What prevents the stars from forming?

A strong clue comes from the Chandra images. The hot gas in the center of the six galaxies containing cold gas appears to be much more disturbed than in the cold gas-free systems. This is a sign that material has been ejected from regions close to the central black hole. These outbursts are possibly driven, in part, by clumpy, cold gas that has been pulled onto the black hole. The outbursts dump most of their energy into the center of the galaxy, where the cold gas is located, preventing the cold gas from cooling sufficiently to form stars.

The other galaxies in the sample, NGC 1399 and NGC 4472, are also forming few if any stars, but they have a very different appearance. No cold gas was detected in these galaxies, and the hot gas in their central regions is much smoother. Additionally, they have powerful jets of highly energetic particles, as shown in radio images from the National Science Foundation's Karl G. Jansky Very Large Array. These jets are likely driven by hot gas falling towards the central supermassive black holes. By pushing against the hot gas, the jets create enormous cavities that are observed in the Chandra images, and they may heat the hot, X-ray emitting gas, preventing it from cooling and forming cold gas and stars. The centers of NGC 1399 and NGC 4472 look smoother in X-rays than the other galaxies, likely because their more powerful jets produce cavities further away from the center, where the X-ray emission is fainter, leaving their bright cores undisturbed.

A paper describing these results was published in the February 25, 2014 issue of the Monthly Notices of the Royal Astronomical Society and is available online. The first author is Norbert Werner from Stanford University in California.

Every galaxies working is different. if one galaxy form a star in 1 spam of time with same resources other galaxy will may develop a star in 10 spam of time because according to their mass and structure they differ from each other but at some time where there resources formation happens at some point with effective power generate a star.

Could the outer limits of the universe
be red dead, instead of inflating?
-according to the red shift theory
manuel Olisipolis