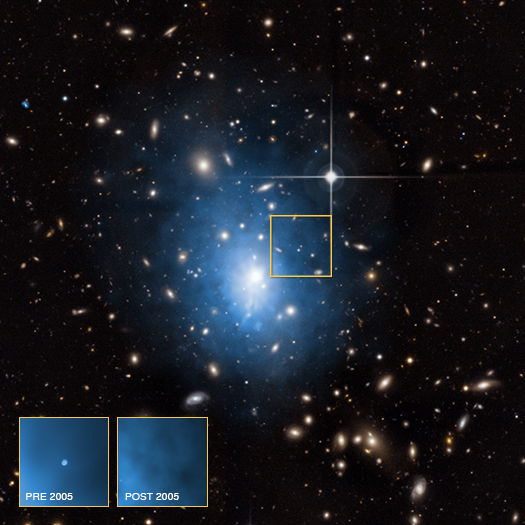 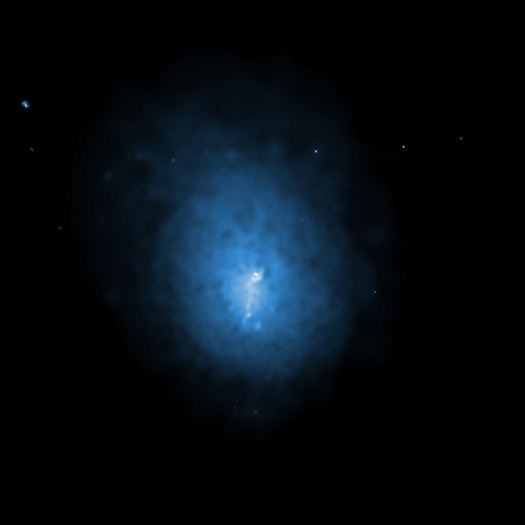 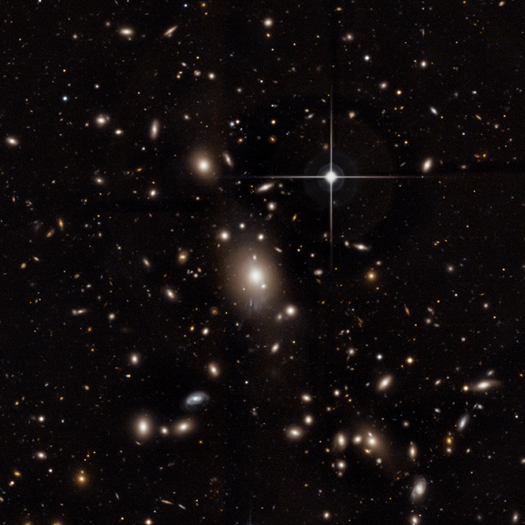 
A bright, long duration flare may be the first recorded event of a black hole destroying a star in a dwarf galaxy, as reported in our latest press release.

The dwarf galaxy is located in the galaxy cluster Abell 1795, about 800 million light years from Earth. A composite image of the cluster shows Chandra X-ray Observatory data in blue and optical data from the Canada-France-Hawaii Telescope in red, green and blue. An inset centered on the dwarf galaxy shows Chandra data taken between 1999 and 2005 on the left and Chandra data taken after 2005 on the right.

The X-ray flare in the inset provides the key evidence for stellar destruction. A star that wanders too close to a supermassive black hole should be ripped apart by extreme tidal forces. As the stellar debris falls toward the black hole, it should produce intense X-rays as it is heated to millions of degrees. The X-rays should fade as the hot gas spirals inward.

This discovery was part of an ongoing search of Chandra's archival data for such events. In the past few years, Chandra and other astronomical satellites have identified several suspected cases of a supermassive black hole ripping apart a nearby star. This newly discovered episode of cosmic, black-hole-induced violence is different because it has been associated with a much smaller galaxy than these other cases.

The black hole in this dwarf galaxy may be only a few hundred thousand times as massive as the Sun, making it ten times less massive than the Galaxy's supermassive black hole. This places it in what astronomers call an "intermediate mass black hole" category.

Astronomers believe that intermediate mass black holes may be the "seeds" that ultimately formed the supermassive black holes in the centers of galaxies like the Milky Way. Finding additional nearby examples should teach us about how these primordial galaxies from the early universe grew and evolved over cosmic time.

Two independent studies reported observations of this event. The paper led by Peter Maksym is available online and was published in the November 1st, 2013 issue of the Monthly Notices of the Royal Astronomical Society. A paper led by Davide Donato and colleagues is available online and has been accepted for publication in The Astrophysical Journal.

I have read that when two black holes collide a medium sized black hole is generated. How is it possible? Due to the huge gravitational pull should it not combine together and form a massive black hole?

Do you know how far the closest black whole is?

What if these black holes are nothing than an open gates to others cosmos.

A natural question arises from these observations could such dwarf galaxy have been bigger or much bigger in the past and its central black hole swallowed nearby gas and stellar dust or even entire solar systems during the time, causing that galaxy to shrink significantly? If affirmative, the next question could be has such process occurred progressively during billions of terrestrial years or a catastrophic event happened at a galactic scale in a very short interval of time in the past and the galaxy shrank very fast?

You state "Scientists predict that a star that wanders too close to a giant, or supermassive, black hole could be ripped apart by extreme tidal forces." but the tidal force at the event horizon of supermassive black holes is mild. Isn't it more likely that the accretion disk dynamics and the absolute gravity not tidal forces, or differential gravity lead to the radiation signature? See, e.g., Jeremy D. Schnittman, Julian H. Krolik, Scott C. Noble. The Astrophysical Journal, 2013 769/2/156 DOI 10.1088/0004-637X/769/2/156

Sherri, how do you suppose any information would be transmitted from inside a black hole's event horizon? It's called "black" because the gravitational pull is so great that nothing can get out, not even light.

As for what's on the other side, there isn't another side. Stars that get sucked in are simply ripped apart and compressed, forming part of the black hole's great mass.

I personally believe that it is worth sending Chandra into the black hole considering that we can possibly open man-kind to the mystries of not only black holes, but also theoretical white holes and worm holes. However, considering that black holes come in different shapes or so I was told by my AP Physics teacher, would we not have to make sure that the shape of the black hole corresponds with the typical shape of a worm hole.

Could we send Chandra into a black hole so that we can know what goes on inside or on the other side of it? Is that possible? not that I would like to lose Chandra, but it would be extremely educational, don't you agree?