Some Super Bowl Physics (And a Little Bit of the Cosmos) 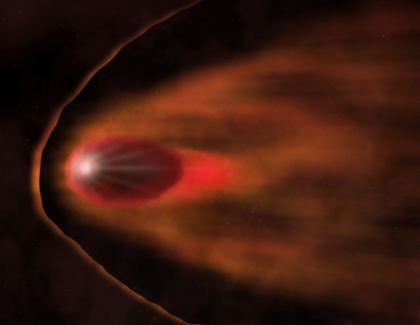 The good folks over at Cosmic Variance have blogged about a "Sports Science" segment that analyzes how well (and accurately) the New Orleans Saints quarterback Drew Brees throws the football. There's a little discussion about whether or not Brees is more accurate than an Olympic archer, but what caught our eyes and ears was the spin rate of the football they estimate Brees gives the ball.

According to the segment, the football has a spin rate of about 600 rpm during the pass. This is really fast — so much that they compare it to a power wrench that takes lug nuts off during a NASCAR pit stop. (By the way, we're sure Peyton Manning can throw something comparable here, so we're not taking sides in the big Sunday affair.)

The rate of 600 rpm (rpm=rotation per minute) translates into 10 rotations per second. Pretty impressive if you think about it. We certainly think so, but we'd like to point out how this compares to some phenomena in the cosmos. In particular, let's talk about these things called millisecond pulsars. These are the dead cores of stars that are spinning between 100 and 1000 times a second (hence where they get their name).

So, not bad when compared to a Drew Brees pass, right? Well, wait until you realize the difference in physical size. Footballs used in the NFL have a circumference of 22 inches at their widest point, which means the diameter is about 7 inches. Millisecond pulsars, on the other hand, are not measure in inches across, but miles. In other words you've got this dense, compact object about 10 miles wide that is spinning ten to a hundred times faster than a spiral thrown by a quarterback.

It turns out that millisecond pulsars are more than just speed record holders. Astronomers can use them to test general relativity and conduct a lot of other impossible-to-do-on-Earth physics experiments. Chandra has been used to study them and other observatories like Fermi are showing just how extreme physics can get out there.