The Origins of Particle Ribbons in the Center of our Galaxy

Astronomers are taking a closer look at a party brewing in the center of our Galaxy. The supermassive black hole that resides there, known as Sagittarius A*, appears to be throwing a celebration complete with flying cosmic ribbons.

However, the sheer scale of everything in space already tells us that these are no ordinary ribbons. They are actually gigantic filaments, up to 100 light years (about 588 trillion miles!) long and ⅓ of a light year thick. The filaments are produced by particles moving at relativistic speeds, meaning near the speed of light, spiraling around strong magnetic field lines in the center of the Galaxy.

The remaining mystery: how did these particles zooming around the Galactic Center reach such incredible speeds? After all, nothing in the universe can move at the speed of light—it requires an astounding amount of energy to get even close.

Shuo Zhang of Bard College posed this question in the "Galactic Center To and Fro" press session held at the all-virtual 236th AAS meeting from June 1-3, 2020. She described her extensive progress towards an answer using new observations from NASA's Chandra X-ray Observatory.

Back in 2014, Zhang was already thinking about these speedy particles and had proposed a model to explain them. An extremely energetic object in the center of the Galaxy could produce relativistic, heavy particles like protons and ions, also with extreme energies. (Just how extreme? Imagine a single proton, weighing one trillionth of a trillionth of a gram, with enough energy to push a paperclip by an inch.) These heavy particles would collide with surrounding gas and dust, specifically in colder, denser regions known as molecular clouds.

These collisions ultimately produce electrons, carrying around 1000 times less energy than the original heavy particles. However, electrons are so much lighter than protons and ions that they end up flying around with the same, if not faster, relativistic speeds as the heavy particles. These electrons are the particles that produce the ribbon-like filaments, zooming through the Galactic Center and lighting up their trails when they encounter magnetic field lines. 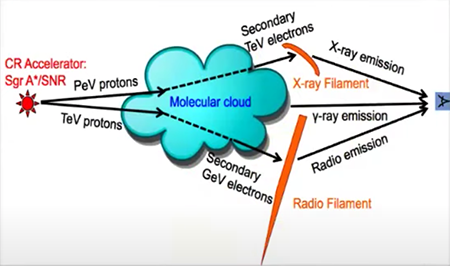 Zhang's next step will be to pin down the extremely energetic object that kicks off this process of accelerating particles to near light speeds. It could be any one of the energetic sources around the Galactic Center, from supernova remnants to stellar winds to pulsar wind nebulas, which are rotating neutron stars that produce a "wind" of high-energy particles.

One clear candidate in the very center of our Galaxy, though, is Sagittarius A*, due to the fact that active galactic nuclei (AGN) are strong particle accelerators and astronomers suspect Sagittarius A* used to be a powerful AGN one to three million years ago. Once accelerated, high-energy particles can take millions of years to cool and slow down, so these filaments may be remaining artifacts from the AGN phase of Sagittarius A*.

To confirm this culprit, and thus Zhang's model, astronomers need to collect more data on the filaments in the two wavelengths they emit in: radio waves and X-rays.

With enough multiwavelength data for the filaments, Zhang and her colleagues can more precisely examine their spectra (meaning how bright they are across different wavelengths), locations, and changes in brightness with time. These three factors together can point to the location of the source that is creating the relativistic particles in question. Historically, however, the filaments have been mostly only observed by radio telescopes, so the data has been missing a significant X-ray component. 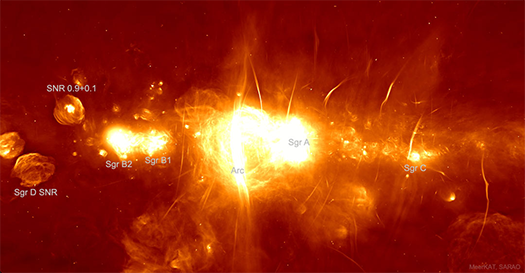 To address this need, Zhang recently used deep Chandra observations of a small region around Sagittarius A*, known as the Sagittarius A complex, to identify five new filaments—doubling the count of X-ray filaments ever observed in that region! Now that she has brought the X-ray data more up to speed, she can combine this Chandra data (as well as still-incoming X-ray data from NASA's NUSTAR mission) with existing radio data.

By putting all of this multiwavelength data together, Zhang can begin uncovering the origins of these Galactic Center filaments and definitively test her proposed model. We will see if our central supermassive black hole Sagittarius A* is indeed responsible for throwing the biggest party in the Galaxy.

Category:
Milky Way Galaxy
Disclaimer: This service is provided as a free forum for registered users. Users' comments do not reflect the views of the Chandra X-ray Center and the Harvard-Smithsonian Center for Astrophysics.
Please note this is a moderated blog. No pornography, spam, profanity or discriminatory remarks are allowed. No personal attacks are allowed. Users should stay on topic to keep it relevant for the readers.
Read the privacy statement