Did We Finally Detect the First Heavily Obscured Quasar in the Kindergarten of the Universe? 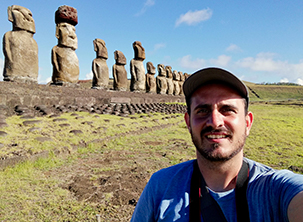 Theoreticians can explain the existence of such fully grown SMBHs just after a few hundred million years after the Big Bang by making models where the SMBH seeds grow in mass by pulling in (“accreting”) surrounding material at an extremely fast rate for extended periods of time. So, why do we not find such small, fast accreting SMBHs? It turns out that the same material (gas and dust) that is accreting onto the SMBHs acts as a screen against — or, as astrophysicists say, “obscures” — most of the emitted radiation.

These obscured quasars are thus extremely elusive. In fact, with current observational facilities we can detect only quasars in a subsequent, unobscured phase, when the powerful quasar radiation has swept away most of the obscuring material, and the central SMBHs have already reached large masses. So, children are in the classroom, but we do not see them!

I am a member of an international research group of astrophysicists that recently used the NASA Chandra X-ray Observatory to study the X-ray properties of a sample of quasars in the first billion years of the Universe. One of the targets is PSO167-13, a quasar at a distance corresponding to some 13 billion years ago, when the Universe was just about 800 million years old. This quasar was first selected in optical light where its emission has typical properties of an unobscured quasar, as do all of the other targets. Previous observations with ALMA and Hubble Space Telescope revealed that the galaxy hosting PSO167-13 is not isolated, but is interacting and possibly merging with a relatively close (about 16,000 light years) companion galaxy. This is interesting, as galaxy interactions and mergers are believed to be key factors in the formation and evolution of galaxies and SMBHs.

Our Chandra observation of PSO167-13 did not detect emission at energies at the lower end of the range of X-rays (less than 2 keV) that the telescope can detect. However, we detected 3 photons at higher X-ray energies, which, thanks to the outstanding sensitivity of Chandra and its extremely low background level, is a significant detection. So what? Well, obscuration in the X-ray band sampled by Chandra (about 0.5-7 keV) manifests itself mainly as a suppression of emission at low energies, exactly what we see in the PSO167-13 X-ray emission. Comparing the X-ray flux detected at hard energies with the lack of emission at lower energies, we estimated the column density (that is, the amount of material between us and an object) of the obscuring material to be very high, close to the so-called Compton thickness level. Thus, this hard X-ray source represents the first heavily obscured quasar candidate known in the first billion years of the Universe! 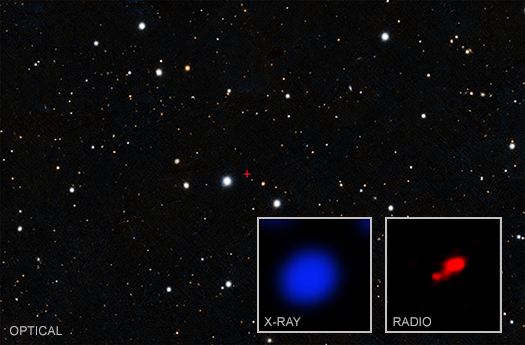 Due to the relatively large positional uncertainty associated with the detected hard X-ray emission, we are currently unable to confidently identify the obscured X-ray source with either PSO167-13 or its companion galaxy, but both possibilities are extremely interesting. If PSO167-13 is the source of the hard X-ray emission, it would be unobscured in optical light and heavily obscured in the X-ray band. This peculiar property has been already found in about half of the quasars belonging to a particular class of objects, called "weak line quasars", at later cosmic times, and may be due to a specific geometry of the accreting material. Alternatively, PSO167-13 could be a "changing look quasar", which was unobscured when it has been observed in optical light, but then quickly (over a timescale of a few months) changed its status to being heavily obscured when it was observed with Chandra. Several cases of changing look quasars are known in published scientific papers.

The second possibility is that the companion galaxy hosts the heavily obscured source. In this even more intriguing case, this system would be the first quasar pair discovered in the early Universe, and one of the two quasars would be the first obscured accreting SMBH in the first billion years of the Universe.

We now must investigate these two possibilities further in order to fully understand the physical properties of this system. Additional observations already planned with Chandra will be fundamental to constrain the obscuration level of this source with a much-improved significance and to confidently associate the X-ray source with either PSO167-13 or its companion galaxy. Once this step is done, we will be able to plan additional multiwavelength observations of this object to gain a complete view of the physical properties of the first heavily obscured quasar in the early universe, which will possibly help the quest for detecting and studying the population of obscured quasars in the kindergarten of the Universe. Stay tuned!