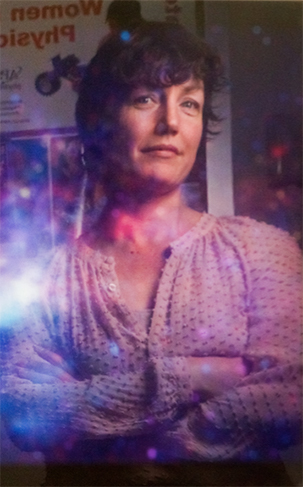 Daryl Haggard is an Assistant Professor of Physics at McGill University. She is an observational astronomer and received her PhD at the University of Washington (Seattle, WA). She and her group study Sagittarius A*, the supermassive black hole at the heart of our Milky Way Galaxy. Haggard's team uses radio, submillimeter, near infrared, and X-ray telescopes to probe Sgr A*'s exotic environment, where strong gravity plays a key role. Her team also studies the interplay between distant growing supermassive black holes, or active galactic nuclei, and their host galaxies. And when opportunity knocks, she and her group search for X-ray flashes emitted from neutron stars and black holes when they collide. These collisions send ripples through space-time, gravitational waves, now being detected by LIGO and Virgo.

What are gravitational waves? What are neutron stars?

Meanwhile, neutron stars are basically big balls of neutrons. They are born during supernova explosions when the gravity on the inside of a star is so intense it forces the electrons into the protons, making neutrons. Actually, the fusion that happens during these supernovas is how atoms like oxygen, iron, all the stuff we need for life, gets built. Neutron stars weigh two or three times the mass of our Sun, but are only the size of a modest city, like Boston or Montreal. They are incredibly dense objects. For example, if you took the Earth’s whole human population and squished it into an object the size of a sugar cube, we’d all become a neutron star.

How/when did you hear that LIGO had identified a neutron star/neutron star merger and what were your first thoughts?

I got the first glimmer of news that LIGO-Virgo had identified a possible neutron star-neutron star merger on the morning of August 17, from my office at McGill University in Montreal. I immediately followed-up with my closest collaborators, my postdoc Mel Nynka here at McGill, Vicky Kalogera at Northwestern in the LIGO collaboration, and Brad Cenko and Phil Evans on the Swift X-ray telescope team. I started bugging them to find out whether we had the evidence we needed to “trigger“ our Chandra X-ray observations to search for this event.

It was a joyful and hectic morning. We had a LIGO-Virgo phone conference scheduled that day, which was unrelated to this event. It was a meeting between gravitational wave and “electromagnetic” or EM observers, people who study light like me, so we all got on the call and tried to figure out what was happening and how excited we should be. It was clear within a few hours that this was a VERY promising source. The whole thing was extra unbelievable because the LIGO-Virgo detectors were scheduled to shut down for planned upgrades at the end of August. We couldn’t believe this incredible event was sneaking in just under the wire!

Why is it such a big deal that we’ve discovered an electromagnetic counterpart to a gravitational wave signal?

Why is this such a big deal?! It’s an entirely new level of knowledge. We’ve never been able to do this before. We’ve only been able to detect gravitational radiation for the last couple of years (this is just the fifth detected source to-date.) But this is the VERY FIRST one that has been accompanied by light, where we’ve detected electromagnetic radiation alongside the gravitational radiation. This discovery allows us to link this gravitational wave source up to all the rest of astrophysics, stars, galaxies, explosions, growing massive black holes, and of course neutron star mergers.

When you found out that Chandra had initially made a non-detection, did you think that Chandra wouldn’t detect the source at all? That is, were you surprised that it did?

Chandra’s initial observations of the gravitational wave source didn’t indicate any X-ray emission, though it did show interesting emission from the host galaxy. Without any data to constrain our models, astronomers have come up with lots of ideas for how a source like this should change with time. Since we didn’t know which model was correct, even after the first non-detection, we were still hopeful that X-ray emission would appear later. We were excited to see whether the X-ray “time delay” itself would tell us something about these two neutron stars as they crashed into each other.

Why is the detection of this source with Chandra important? What did it reveal about this cosmic collision?

After the first observations showed no X-ray detection, a series of new Chandra data revealed a distinct X-ray source. This was wildly exciting. The X-rays emitted by merging neutron stars are likely to come from places where magnetic fields are scrambled together. When they twist and break apart, they accelerate particles and these violent, hot plasmas emit heaps of high-energy radiation, including gamma rays and X-rays.

In this case, it looks like the magnetic fields have formed a jet that is smashing into the “interstellar medium”, i.e., all the gas and dust and other stuff in the vicinity around the merging neutron stars. Chandra observations hint that we are seeing this jet from the side so we can study it in great detail. We’ve seen other systems like this one, called “gamma-ray bursts”, but usually we’re looking straight down the jet, which makes the whole thing harder to see. Imagine water coming out of a high-powered hose – you can see it if you’re standing off to the side (“off-axis”, we’d say) and maybe figure out how fast the water is streaming, how much water there is, etc., but if the hose is pointed straight at your face (“on-axis”), the whole thing is harder to sort out. In this case, we’ve got the perfect observer’s view of the off-axis jet. This is the first time we’ve had this perspective and it allows us to begin to understand how this systems sheds energy and impacts its surroundings.

How does this add to or change what we know?

We’ve thought for a while that two neutron stars smashing together might lead to a gamma-ray burst, but the combination of a gravitational wave detection and the data we’re collecting from observatories like Chandra seal the deal. Observations at other wavelengths are also showing us that this merger led to a so-called kilonova (which my husband keeps insisting I call a killa’nova because it sounds cooler). These explosions are crucial for making elements heavier than iron, like platinum, gold, silver, which make up almost half of our periodic table. So we’ve connected together gravitational waves, gamma-ray bursts, off-axis jets, and kilonova explosions, all in one exciting detection. That just doesn’t happen every day.

So many questions still remain about this source! For one thing, we don’t know what’s happening with the source at X-ray wavelengths right now. Most of our X-ray observatories, like Chandra and Swift, can’t look at the source because the Sun is nearby and it is dangerous for our telescope to look at the Sun (just like it’s dangerous for you and me.) One of our elite observatories, NuSTAR, can keep tracking the source, but unlike Chandra, which can tell that some light is coming from the neutron star merger and other light is coming from the host galaxy, those two objects are blended together for NuSTAR. So we don’t know if the source is getting brighter, getting fainter, or just hanging out and staying the same. Each one of these possibilities will tell us something different about the collision and about the super energetic jet that seems to have been launched when these stars merged. Chandra will be back in the game in December, and we’re all eagerly awaiting those new data.

For more images, animations, and information about this exciting discovery, visit: http://chandra.si.edu/photo/2017/2nstars/

Category:
Neutron Stars/X-ray Binaries
Subcategory:
Women in the High Energy Universe
Disclaimer: This service is provided as a free forum for registered users. Users' comments do not reflect the views of the Chandra X-ray Center and the Harvard-Smithsonian Center for Astrophysics.
Please note this is a moderated blog. No pornography, spam, profanity or discriminatory remarks are allowed. No personal attacks are allowed. Users should stay on topic to keep it relevant for the readers.
Read the privacy statement