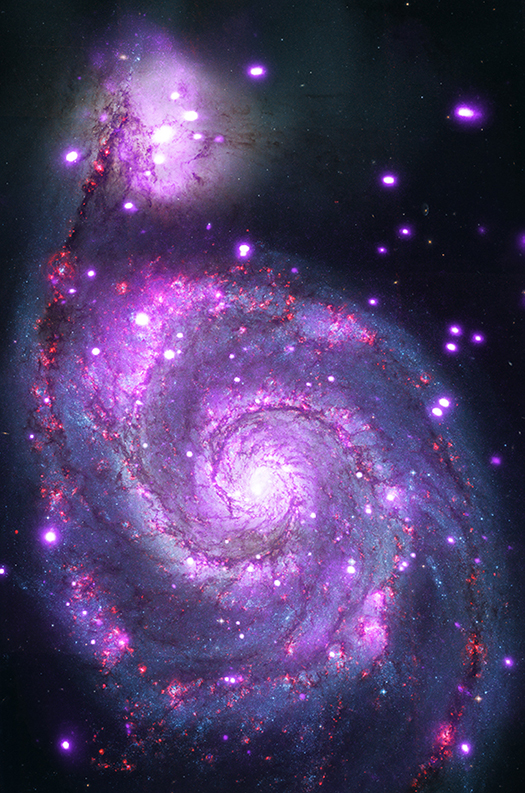 Nearly a million seconds of observing time with NASA's Chandra X-ray Observatory has revealed a spiral galaxy similar to the Milky Way glittering with hundreds of X-ray points of light.

The galaxy is officially named Messier 51 (M51) or NGC 5194, but often goes by its nickname of the "Whirlpool Galaxy." Like the Milky Way, the Whirlpool is a spiral galaxy with spectacular arms of stars and dust. M51 is located about 30 million light years from Earth, and its face-on orientation to Earth gives us a perspective that we can never get of our own spiral galactic home.

By using Chandra, astronomers can peer into the Whirlpool to uncover things that can only be detected in X-rays. In this new composite image, Chandra data are shown in purple. Optical data from the Hubble Space Telescope are red, green, and blue.

Most of the X-ray sources are X-ray binaries (XRBs). These systems consist of pairs of objects where a compact star, either a neutron star or, more rarely, a black hole, is capturing material from an orbiting companion star. The infalling material is accelerated by the intense gravitational field of the compact star and heated to millions of degrees, producing a luminous X-ray source. The Chandra observations reveal that at least ten of the XRBs in M51 are bright enough to contain black holes. In eight of these systems the black holes are likely capturing material from companion stars that are much more massive than the Sun.

Because astronomers have been observing M51 for about a decade with Chandra, they have critical information about how X-ray sources containing black holes behave over time. The black holes with massive stellar companions are consistently bright over the ten years of Chandra observations. These results suggest that the high-mass stars in these X-ray sources also have strong winds that allow for a steady stream of material to flow onto the black hole.