Supernova Cleans Up its Surroundings 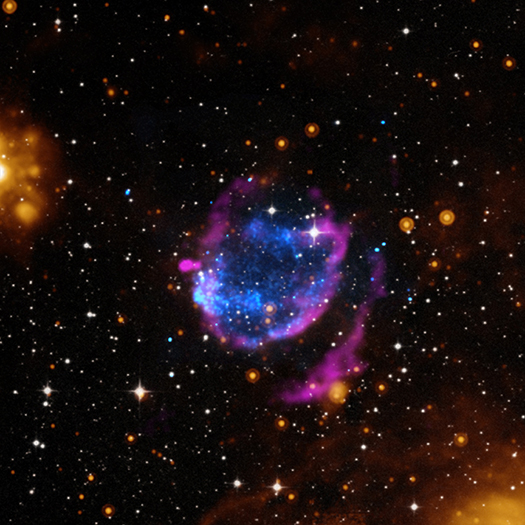 Supernovas are the spectacular ends to the lives of many massive stars. These explosions, which occur on average twice a century in the Milky Way, can produce enormous amounts of energy and be as bright as an entire galaxy. These events are also important because the remains of the shattered star are hurled into space. As this debris field - called a supernova remnant - expands, it carries the material it encounters along with it.

Astronomers have identified a supernova remnant that has several unusual properties. First, they found that this supernova remnant - known as G352.7-0.1 (or, G352 for short) - has swept up a remarkable amount of material, equivalent to about 45 times the mass of the Sun.

Another atypical trait of G352 is that it has a very different shape in radio data compared to that in X-rays. Most of the radio emission is shaped like an ellipse, contrasting with the X-ray emission that fills in the center of the radio ellipse. This is seen in a new composite image of G352 that contains X-rays from NASA's Chandra X-ray Observatory in blue and radio data from the National Science Foundation's Karl G. Jansky Very Large Array in pink. These data have also been combined with infrared data from the Spitzer Space Telescope in orange, and optical data from the Digitized Sky Survey in white. (The infrared emission to the upper left and lower right are not directly related to the supernova remnant.)

A recent study suggests that, surprisingly, the X-ray emission in G352 is dominated by the hotter (about 30 million degrees Celsius) debris from the explosion, rather than cooler (about 2 million degrees) emission from surrounding material that has been swept up by the expanding shock wave. This is curious because astronomers estimate that G352 exploded about 2,200 years ago, and supernova remnants of this age usually produce X-rays that are dominated by swept-up material. Scientists are still trying to come up with an explanation for this behavior.