March is recognized as "Women's History Month" by entities around the country including the federal government. The Chandra X-ray Center is located at the Smithsonian Astrophysical Observatory (SAO) in Cambridge, Mass., which has long been tied to the Harvard College Observatory (HCO) in what is known as the Harvard-Smithsonian Center for Astrophysics (CfA). 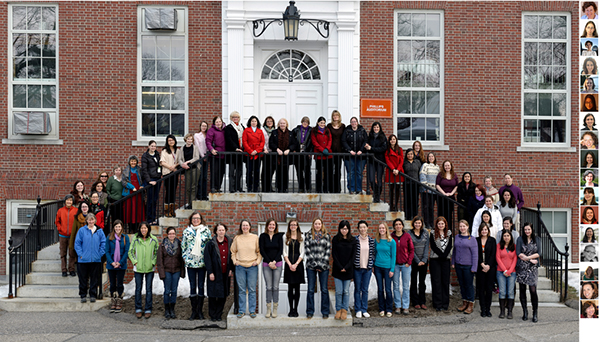 The two components of the CfA -- SAO and HCO – have been the birthplace of many important scientific discoveries since the 19th century. They have also played a pivotal role in the history of women in astronomy and astrophysics. For example, in the early 20th century, scientists such as Henrietta Leavitt and Cecelia Payne-Gaposchkin made significant discoveries that led to major advances in our understanding of the Universe.

Since those early days, there have been many, many female scientists, engineers, students and staff who have come to work at the CfA. Recently, Mohaddesseh Azimlu, a post-doctoral fellow in the CfA’s Radio and Geoastronomy division, came up with the idea to take a photo of as many of the women who are currently at the CfA. Along with Katja Poppenhaeger, a Sagan Fellow at the CfA, they put out a call to make that happen.

On February 25, 2014, fifty-five women gathered on the steps outside the CfA’s Phillips Auditorium and sixteen others who were not able to attend sent in their photos to be included. The result is this excellent photo (thanks to Clive Granger for being the photographer.)

We applaud this effort to encapsulate the critical role that women play not only in astronomy and astrophysics, but all of science. In fact, we can’t think of a better way to kick off Women’s History Month this year.

Subcategory:
Women in the High Energy Universe
Disclaimer: This service is provided as a free forum for registered users. Users' comments do not reflect the views of the Chandra X-ray Center and the Harvard-Smithsonian Center for Astrophysics.
Please note this is a moderated blog. No pornography, spam, profanity or discriminatory remarks are allowed. No personal attacks are allowed. Users should stay on topic to keep it relevant for the readers.
Read the privacy statement