X-Ray Whispers In A Noisy Pub

We are delighted to welcome Katja Poppenhaeger as a guest blogger today. Katja is the first author of a new paper describing the first exoplanet transit ever seen in X-rays, the subject of our latest press release. Katja studied physics at Frankfurt University in Germany, followed by a PhD in astrophysics at Hamburg Observatory in Germany, before coming to Harvard-Smithsonian Center for Astrophysics (CfA) as a postdoc. She will be a Sagan Fellow at CfA beginning in September 2013. 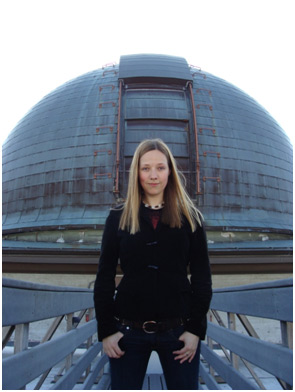 I remember when, back in grad school, my colleagues and I were watching the launch of the Kepler space telescope on the internet. We were really excited because this telescope would - and, in retrospect, has - discovered thousands of planet candidates around other stars, using the transit method. Back then I thought to myself, wouldn't it be cool if I could observe such a transit in X-rays? X-rays are absorbed high up in our Earth's atmosphere, which makes the Earth's X-ray radius about 100 km larger than its optical radius - that is about 1.5% in terms of extra radius. I wanted to use that effect to test how far the outer atmosphere of a Hot Jupiter extends. These Hot Jupiters orbit so close to their central star that they get heated up to temperatures over 1000 K, and their atmospheres can even boil away (which let me hope that there might be more than just an extra 1.5% in radius to find for such planets).

So the first thing I did was to check the data archives of the two big X-ray telescopes, Chandra and XMM-Newton, to see if someone had - by chance or on purpose - observed a planet-hosting star in X-rays while its planet was transiting in front of it. And I couldn't believe my luck: there was indeed a fifteen hour long observation of the star HD 189733 with XMM-Newton, and its Hot Jupiter HD 189733b was crossing in front of the star during that observation.

But when I looked at the light curve, I was rather disappointed: The star is magnetically active, meaning that its corona is bright and flickering, so its X-ray light curve showed lots of scatter. Looking for a transit signal in this light curve was like trying to hear a whisper in a noisy pub. But playing with the light curve for a bit, I realized that during the two hours of the observation where I knew the transit was happening, the X-ray signal was slightly weaker than before and after the transit. It might just have been luck, but I was determined: I had to get more data. With more transits that I could add up, the flickering of the corona would finally average out, and the transit signal would become clearer. 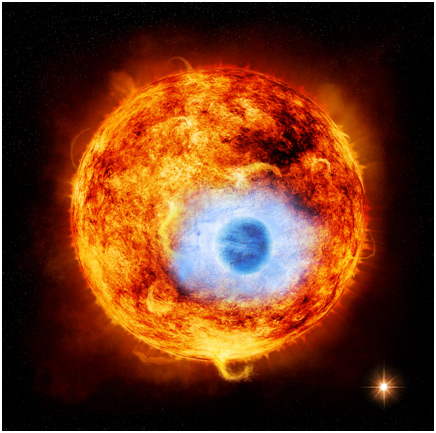 An artist's impression of the HD 189773 system, showing the Hot Jupiter transiting the star.
Credit: NASA/CXC/M.Weiss

So I applied for new observations and was granted time to observe six transits with the Chandra X-ray Observatory. When the data arrived, I combined the signal of all observations and was finally successful: I could detect the transit of the planet in X-rays. What surprised me was how deep the transit was: The planet swallowed about 6-8% of the X-ray light from the star, while it only blocked 2.4% of the starlight at optical wavelengths. That means that the planet's atmosphere blocks X-rays at altitudes of more than 60,000 km above its optical radius - a 75% larger radius in X-rays! That is pretty big, and I calculated that the outer atmosphere has to be heated up to about 20,000 K to sustain itself at such high altitudes. The bigger X-ray radius also means that the planet loses its atmosphere about 40% faster than thought before.

So what's next? I'd like to know if the X-ray radius of other hot exoplanets is extended as well - and if yes, does the extent depend on the heating of the planet by the host star, or more on things like the overall density of the planet? Together with my former colleagues from Hamburg Observatory, we will test this for the even hotter Jupiter CoRoT-2b, using XMM-Newton. Personally, I'd like it best if the CoRoT-2b experiment had a completely surprising outcome as well - we'll know next year!